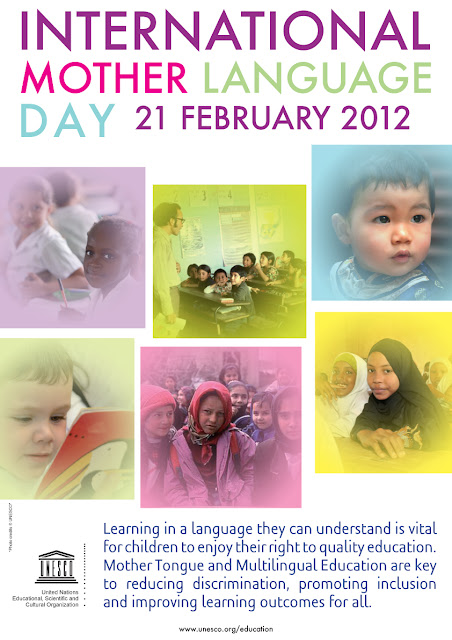 International Mother Language Day has been celebrated every year since February 2000 to promote linguistic and cultural diversity and multilingualism. This year the theme of the International Mother Language day is “Mother tongue instruction and inclusive education”. UNESCO highlights the importance of mother tongue as part of the right to education and encourages its member states to promote instruction and education in the mother tongue.

International Mother Language Day was proclaimed by the General Conference of the United Nations Educational, Scientific and Cultural Organization (UNESCO) in November 1999 (30C/62).

On 16 May 2009 the United Nations General Assembly in its resolution A/RES/61/266called upon Member States "to promote the preservation and protection of all languages used by peoples of the world". By the same resolution, the General Assembly proclaimed 2008 as the International Year of Languages, to promote unity in diversity and international understanding, through multilingualism and multiculturalism.

International Mother Language Day has been observed every year since February 2000 to promote linguistic and cultural diversity and multilingualism. The date represents the day in 1952 when students demonstrating for recognition of their language, Bangla, as one of the two national languages of the then Pakistan, were shot and killed by police in Dhaka, the capital of what is now Bangladesh.

Languages are the most powerful instruments of preserving and developing our tangible and intangible heritage. All moves to promote the dissemination of mother tongues will serve not only to encourage linguistic diversity and multilingual education but also to develop fuller awareness of linguistic and cultural traditions throughout the world and to inspire solidarity based on understanding, tolerance and dialogue.
"The language of our thoughts and our emotions is our most valuable asset. Multilingualism is our ally in ensuring quality education for all, in promoting inclusion and in combating discrimination. "
Irina Bokova, Director-General of UNESCO
Message for International Mother Language Day 2012
Posted by Bedre Manjunath at 8:40 AM