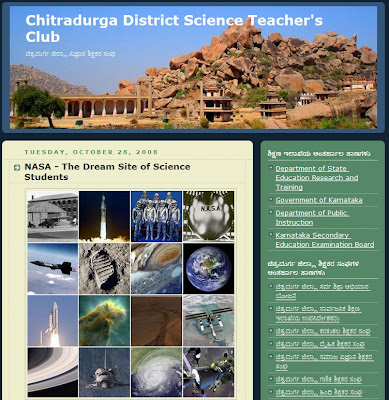 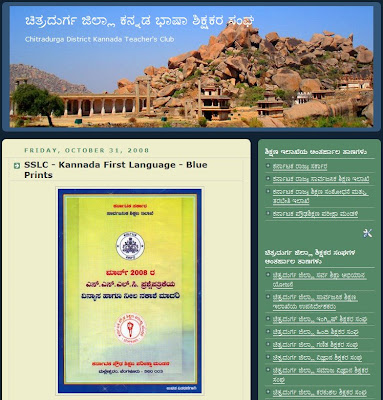 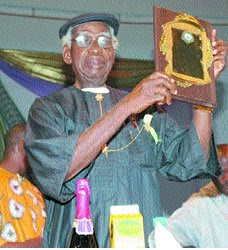 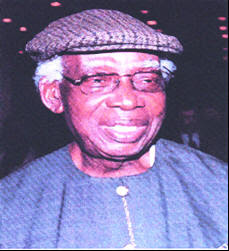 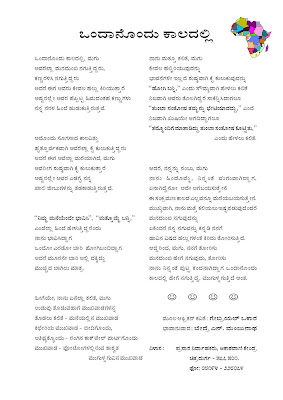 "Feel at home", "come again"
they say, and when I come
again and feel
at home, once, twice,
there will be no thrice
for then I find doors shut on me.
So I learned many things, son
I have learned to wear my faces
like dresses - home face,
office face, street face, host face
cocktail face with all their conforming smiles
like a fixed portrait smile.
I have learned too
to laugh with only my teeth
and shake hands without my heart
I have also learned to say, ‘Goodbye’,
when I mean ‘Good-riddance’.
to say ‘Glad to meet you’
without being glad, and to say, it’s been
nice talking to you, after being bored.

But believe me, son
I want to be what I used to be
When I was like you. I want
to unlearn all these MUTING things.
Most of all, I want to relearn
how to laugh, for my laugh in the mirror
shows only my teeth like a snake’s bare fangs.
So show me, son,
how to laugh, show me how
I used to laugh and smile
Once upon a time when I was like you.
About the poet :
Gabriel Okara is an Aftrican poet. He was born in 1921 in Nigeria. He was educated at Government College, Umuahia. His parents were not rich. He worked as a book binder and later as an information officer at Enugu. He also wrote plays and features for broadcasting and became a poet of outstanding ability. His poems appeared regularly in Black Orpheus. He has also written a novel called Voice.
[The Poem ‘Once upon a Time’ tells us about the emptiness of modern life. Everything we do is artificial.]
- - - - - - - - - - - - - - - - - - - - - - - - - - - - - - - - - - - - - - - - - - - - - - -
Glossary:
cock-tail: a drink usually made from a mixture of one or more alcoholic drinks. conform: to be and thinking the same way as most other people in a group or society. portrait: a painting, drawing or photograph of a person especially of the head and shoulders. fangs: long, sharp teeth of some animals like snakes and dogs. muting: changing all the time.
EXERCISES
I. A. Four answers are suggested for each of the following
statements. Pick out the correct answer and write it
in your notebook.
1. In the first five stanzas the poet is talking about
a) the honest and innocent world of children
b) the insincere world of adults
c) the difference between the past and the present
d) the old and the young.
2. The last four lines of the poem suggest
a) hope
b) regret
c) a sense of loss
d) eagerness to learn.

3. ‘Ice-cold-block’ eyes means
a) The eyes are wet with tears
b) expressionless eyes
c) a state of lack of feelings
d) a dead man’s eyes.
4. ‘They’ in line 4 of stanza I refers to
a) people in the past
b) present day people
c) all adults in general
d) young children
5. ‘Their eyes search behind my shadow’ means
a) they avoid meeting his eyes
b) they try to look at the darker side of the person
c) they convey no emotions
d) they try to reach what is not there.
6. ‘They’ in the first stanza means
a) the poet’s friends
b) his sons friends
c) the poet and his friends
d) the poet and his son
7. The poet has learnt from
a) his friends
b) the society
c) his son
d) himself
8. Why does the poet want to learn from his son? Because
his son
a) is innocent
b) has more knowledge
c) knows about it more than his father
d) is a child
B. Answer the following questions in a sentence or two
each.
1. What does the expression ‘laugh with their teeth’ mean?
2. When did people use to shake hands with their hearts?
3. In stanza 4, the poet says he has learnt many things. What has he learnt?
4. What does the speaker want to be?
5. What does he want to relearn?
6. What do you think is a ‘conforming smile’. Is it the same as a ‘portrait smile’?
7. What is the message of the poem?
C1. What is the poet disgusted with? What help does he want from his son? (50 words)
C2: Make a list of actions which prove you to be a good guest and a good host. Compare your list with that of your friend.

II.A Pick out the similes from the poem and write them in your note-book.
B. Write suitable similes to compare
a) your mother
b) your school
Posted by Bedre Manjunath at 3:55 PM 1 comment: 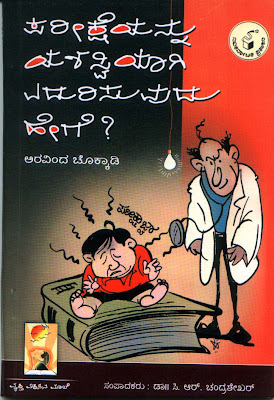 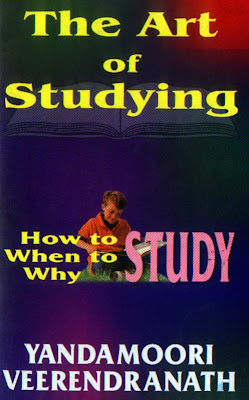 NO MORE NOW
Hello Friends!
Hope you are all tense with exam-fears! Well, here is a gifted book which helps you to face your exams with a smile. This is a useful weapon to drive away your exam blues!
The Art of Studying by Yandamoori Veerendranath, a famous Telugu novelist and writer of various books on Personality Development, gives you a lot of useful study techniques. The subtitle, How to Study, When to Study, Why to Study, suggests the purpose of the book. A small gift book, 26 Tips to Parents ( Your best investment is your children - How to Shape Them?) given along with The Art of Studying contains valuable guidence to the parents who play a major role in shaping the career of their children.
Praneeth Yandamoori, son of Yandamoori Veerendranath, achieved a State Rank in his intermediate examination by following the12-C Technique outlined by his father in the book The Art of Studying. After his PU Course, he joined as an industrial trainee in a reputed firm and continued his studies during evening hours. He completed his C.A.too. He was selected as an Investment Analyst to process power projects for 4 countries under World Bank Group and was paid Rs. 1 lakh salary per month! Later he joined a reputed Business School in France for his MBA. All this achievement was possible for him because of these 12-C Technique, so he says in the Preface of this book. A lovely preface by a son, a young man of 23 years, to his father’s wonderful work indeed!
What is that 12-C Technique ? Calm, Clear, Colonial, Create, Construct, Critical, Compare, Consume, Corsage, Comic, Comfort and Communicate. If a student follows these techniques, well, the success is assured. There is a lot more in the book apart from these 12-Cs. It tells you about intelligence, mind matters, memory power, knowledge and so many things. As an answer to the question How to Study?, the authour suggests the four fold path - Analysis, Memory, Recollection and Creativity. There are a few tips for better reading too. Positive Thinking and Lateral Thinking concepts have been introduced to the students.
In the gift book, 26 tips are given to the parents to help their children achieve merits. There is a special paper designed to test the Intelligence and Common Sense.
It is hightime now, for you, to read this book and get through your exams with distinction. Try your luck! (For Kannada students, the Kannada version of the same is available. It has been translated into Kannada by R. V. Kattimani Tadakkal)
Name of the Book : The Art of Studying ( How to Study, When to Study, Why to Study)
Author : Yandamoori Veerendranath
Publishers : Navasahithi Book House, Karl Marx Road, Vijayawada - 520 002.
Price : Rs. 50-00
Posted by Bedre Manjunath at 3:18 PM No comments: