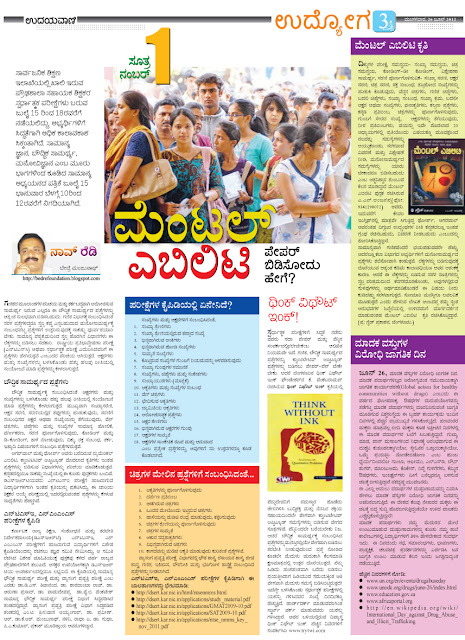 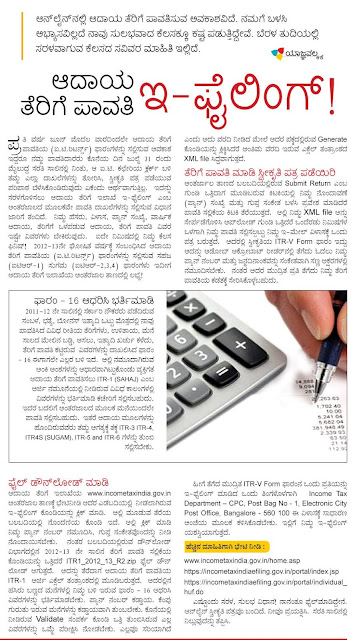 Income Tax Returns 2012 eFiling - Article in Vijayavani 25 June 12
Posted by Bedre Manjunath at 6:10 AM No comments:

Quiz - A Window to the World of Competition - 5th Edition 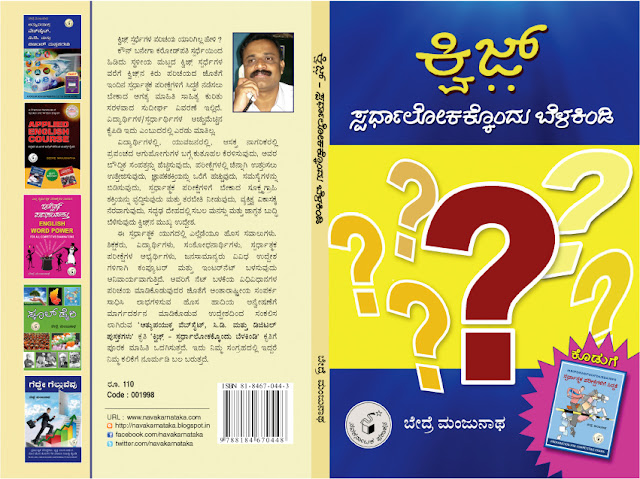 Quiz - A Window to the World of Competition - Revised and Enlarged 5th Edition
(With a Gift Book - Preparation for Competitive Examinations) by Bedre Manjunath
Available at www.navakarnataka.com and www.flipkart.com
Phone: 080-22203580
Posted by Bedre Manjunath at 8:40 PM No comments:

Email ThisBlogThis!Share to TwitterShare to FacebookShare to Pinterest
Labels: Quiz - A Window to the World of Competition - Revised and Enlarged 5th Edition, Quiz Book by Bedre 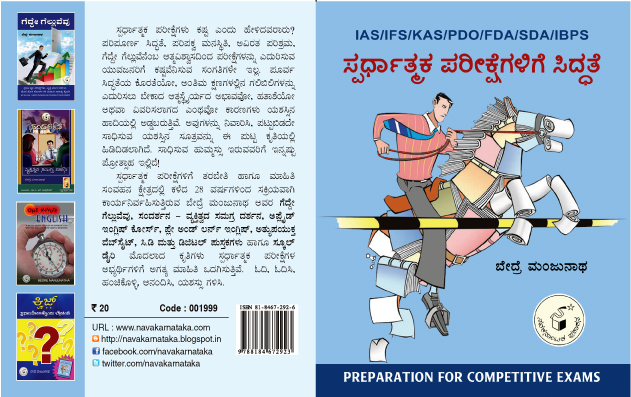 Email ThisBlogThis!Share to TwitterShare to FacebookShare to Pinterest
Labels: Preparation for Competitive Examinations 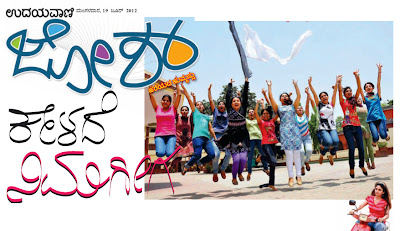 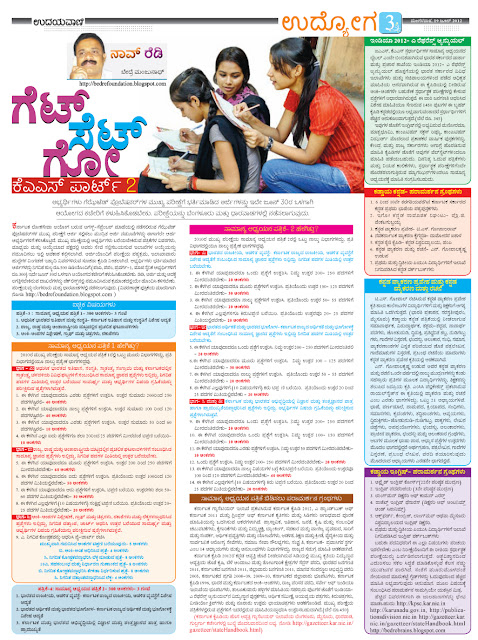 KAS Mains General Studies Papers1 and 2 - Article in Udayavani Daily - Josh 19 June 2012
Posted by Bedre Manjunath at 6:30 AM No comments:

Posted by Bedre Manjunath at 10:42 PM No comments: 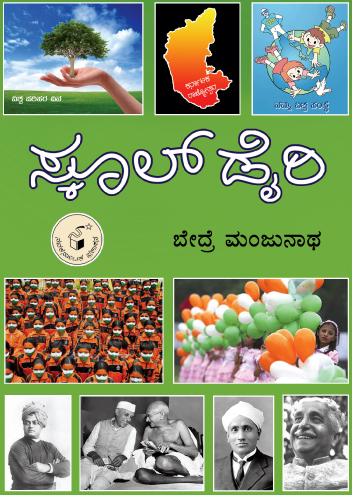 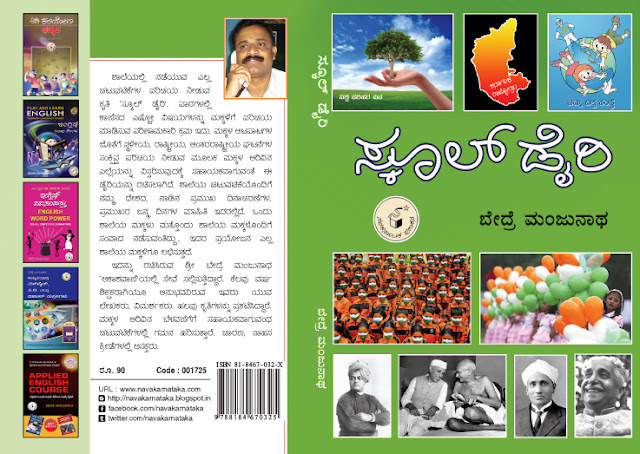 School Diary - Latest Edition
Available at all leading book stores and Navakarnataka Book Stalls and on www.flipkar.com
Ph. 080-22203580
Posted by Bedre Manjunath at 2:25 PM No comments: 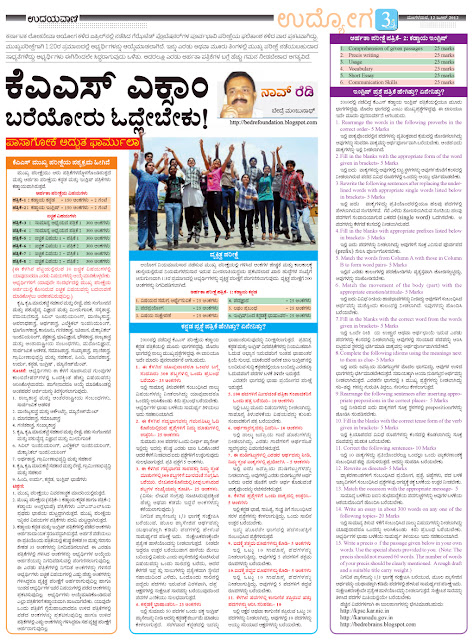 KARNATAKA PUBLIC SERVICE COMMISSION E(1)612/2012-13/PSC Office of the Public Service Commisssion, 'Udyoga soudha',Bangalore. Dated 06/06/12 NOTIFICATION ^^^^^^^^^^^^^^ List of the candidates eligible for Main examination for recruitment to Gazetted Probationers Group 'A' & 'B' services, 2011 for which the Preliminary examination was conducted by the commission on 22-04-2012 is hereby published for information of the candidates :- 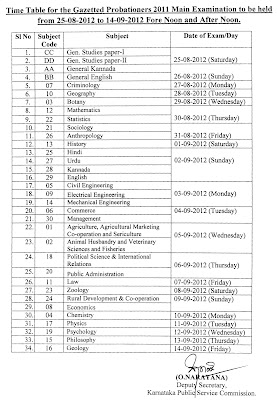 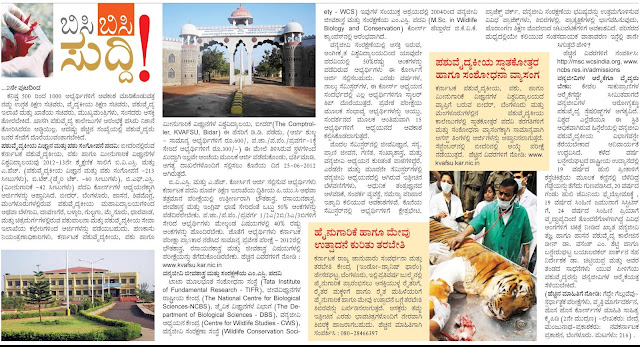 Veterinary Courses in Karnataka - Article in Vijayavani Daily - Musth 06 June 2012
Posted by Bedre Manjunath at 7:25 AM No comments: 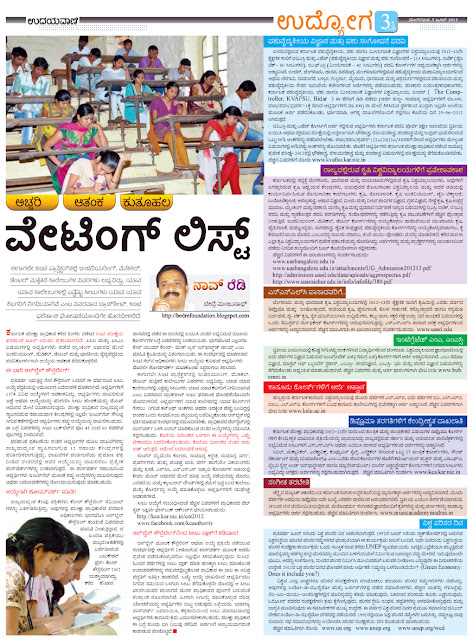 Admission to Veterinary and Agriculture Courses - CET Results - Article in Udayavani Daily - Josh 05 June 2012
Posted by Bedre Manjunath at 7:45 AM No comments:

‘Listen to yourself, decide on a course'

All ears:The Hindu EducationPlus career counselling and guidance programme held in Hassan on Saturday met with an impressive response.
The Hindu EducationPlus career counselling and guidance programme, which was held in Hassan on Saturday, met with an impressive response.
Over 500 students
More than 500 students attended the programme held to inform students of classes 10, 11 and 12 about the various opportunities available and help them make crucial career and course decisions.
Students were also given information on the online CET seat selection process. H.J. Hamsaraj, noted industrialist and promoter of non-conventional energy, released our annual career guidance handbook, ‘Shape Your Career'. In his address, he appealed to students to listen to their inner voices before deciding to pursue a particular course. He called upon students to make the right career choice.
‘Influenced by others'
“Many students decide to pursue a course going by what their friends, parents or teachers say. Listen to yourself first. Make a list of your qualities and decide on a course after talking to experts in different fields,” he said.
He said, “I tell them to know their talent and decide what to do. The course should match your talent rather than the wish of your parents and relatives.”
Mr. Hamsaraj, who worked abroad for a decade, said that he returned to his native place as his father insisted that he should give back to society. He returned to India to set up an industry. He appealed to students to acquire knowledge from all available sources, and come back and try to improve the lives of people in his/her native place.
Bedre N. Manjunath, founder of Bedre Foundation, made a presentation on the opportunities available for students who have passed II PU. “Only you can sign your bank cheque. Similarly, only you know what will suit you,” he told students. Commenting that many parents decide their children's fate, he appealed to parents to listen to their children and let them take experts' advice before deciding on their next step. He said that students should choose the right career according to their interests and talents. Making a reference to the film, 3 Idiots , he said it was meaningless to push a student aspiring to become a wildlife photographer to study engineering.
Doubts raised
S. Puttannaiah and B.M Jagadeesh, representatives of the Karnataka Examinations Authority, informed students about the online CET seat selection process. Students and parents raised many doubts about the process, documents to produce and choosing colleges and courses. The students actively took part in the interaction with B.C. Ravi Kumar, Director of Hassan Institute of Medical Sciences and Karisiddappa, principal of Government College of Engineering in Hassan, who represented the medicine and engineering streams.
The session concluded with an aptitude and abilities test conducted by MeriTrac, our assessment partners.
The title sponsor for the programme was State Bank of India. The associate sponsors were Bearys Institute of Technology, Mangalore, Padmashree Group of Institutions, Bangalore, Nitte Meenakshi Institute of Technology, Bangalore, Sambhram Institutions, Rajiv Gandhi University of Health Sciences, Karnataka, and Institute of Chartered Accountants of India, Bangalore.

STAFF CORRESPONDENT
SHARE  ·   PRINT   ·   T+
The online CET seat allotment process is transparent and nobody can sell their seats, S. Puttannaiah of the Karnataka Examinations Authority (KEA), has said. He was speaking at The Hindu EducationPlus career counselling and guidance programme held here on Saturday.
The KEA is conducting the process online for the first time. Mr. Puttannaiah said that the students would get enough time to finalise their choice of courses and colleges.
The process had been designed in such a way that no student would lose his right to choose his desired course or college according to his CET rank.
“Students can choose their course and college sitting at home or at cyber cafes. He or she can change his/her priorities any number of times in the stipulated time,” he said.
Further, he said there was no chance of selling seats. Students would be given a specific period of time to get admission to the seat they chose. If the seat remained vacant after this period, it would be in a separate pool of seats, which could not be “bought” by anybody.
A couple of parents wanted to know what would be the fate of their children if their accounts were hacked and their priorities were altered. Mr. Puttannaiah said that students could change their passwords any number of times. However, the parents said that changing the password was not the solution.
Karisiddappa, principal of the Government College of Engineering, suggested that KEA experts introduce bio-metric system so that nobody could manipulate it. Mr. Puttannaiah assured the audience that he would convey this suggestion to senior officials.
‘Be perseverant'
B.C. Ravi Kumar, director of the Hassan Institute of Medical Sciences, appealed to students who wish to study medicine to cultivate perseverance. “You have to work hard throughout the course. If you want to become a specialist, you have to be ready to spend many years learning,” he said. Karisiddappa, principal of Government College of Engineering in Hassan, told students that there were many courses offering specialisation in engineering stream.
“When we studied engineering in 1970s, there were no specialisation courses. Whether to bridge a building or a bridge, the course is same. But now it is not so. You can opt for specialised courses,” he said.

The Hindu EducationPlus career counselling and guidance programme in Hassan - A Report in The Hindu 03 June 2012
Posted by Bedre Manjunath at 7:34 AM 1 comment:

Please open this link in Windows Explorer only

Career Guidance - Opportunities after PUC - An Interactive Session at Hassan

The Hindu EducationPlus will hold its annual career counselling and guidance programme in Hassan on Saturday. The programme is to help students who have completed Class 10, 11 and 12 make the right decisions with regard to courses and careers. It will be held at AVK College for Women, near the old bus-stand, from 10 a.m. to 1 p.m.
The participants will get an opportunity to interact with experts from the Karnataka Examinations Authority, which conducts the online CET seat allotment for admission to professional courses.
Students and parents can interact with the experts and clarify their doubts on the online seat allotment process.
H.J. Hamsaraj, an industrialist and a known-name in the field of non-conventional energy technologies, will inaugurate the programme and speak on ‘Pursuing excellence in academic life and enhancing employability'.
Bedre N. Manjunath, founder of Bedre Foundation, will throw light on a host of career opportunities besides engineering and medicine. This will be followed by an interactive session with a panel of experts comprising B.C. Ravi Kumar, principal and director of the Hassan Institute of Medical Sciences, and Karisiddappa, principal of the Government College of Engineering, Hassan. Mr. Manjunath will also respond to queries related to different courses and opportunities.
There will also be an aptitude and abilities test conducted by MeriTrac, the assessment partners to the programme.
Handbook
A well-researched handbook, presenting a wide range of career options, trends in various fields, including pure mathematics, animation and fine arts, will be distributed to the participants for free. The students are requested to be present at the venue half an hour before the programme commences, for registration.
The title sponsor for the event is the State Bank of India. The associate sponsors are Bearys Institute of Technology, Mangalore; Padmashree Group of Institutions, Bangalore; Nitte Meenakshi Institute of Technology, Bangalore; Sambhram Institutions; Rajiv Gandhi University of Health Sciences, Karnataka, and Institute of Chartered Accountants of India, Bangalore.
Share
Posted by Bedre Manjunath at 2:33 PM 1 comment: