Radio programme on MNREGA a hit

Feedback:AIR Hassan staff sorting out letters received in response to ‘Deevige', on Friday.— Photo: Prakash Hassan
Deevige, a sponsored programme on the Mahatma Gandhi National Rural Employment Guarantee Act (MNREGA), produced by All India Radio (AIR) Hassan has received an overwhelming response from the public.
The programme, broadcast by all AIR stations in the State simultaneously at 7.45 p.m. every day, has completed 69 episodes so far. Eleven more episodes are scheduled to be aired before March 20. At the end of each episode, AIR invites response and suggestion from the listeners.
In response, the AIR Hassan station has received 10,000 letters from the listeners. “We never expected this. This is the first time we have received so many letters in response to our programme in the recent years,” H. Srinivas, programme executive of AIR Hassan, said.
Programme executives of the station H. Srinivas, Narayana M. Bhat, Bedre N. Manjunath and transmission executive Vijay Angadi travelled across 16 districts of the State and produced the episodes. The programme, sponsored by the Department of Rural Development and Panchayat Raj, focuses on changes brought about by the MNREGA in rural areas.
The station has received responses from across the State. “Many have suggested changes in the implementation of the job guarantee scheme and have narrated their experience as a beneficiary of the scheme. A few have raised objections to the way the scheme is being implemented in some places,” Mr. Srinivas said.
Mr. Bhat said the MNREGA had helped in bringing about financial inclusion in rural areas. Many beneficiaries had opened bank accounts for the first time in their life, he said.
“We have focussed all theses developments in the programme,” he added.
AIR Hassan has earned revenue of Rs. 14 lakh through the programme.
Thank You Editor and G T Sathis, Dist. Correspondent 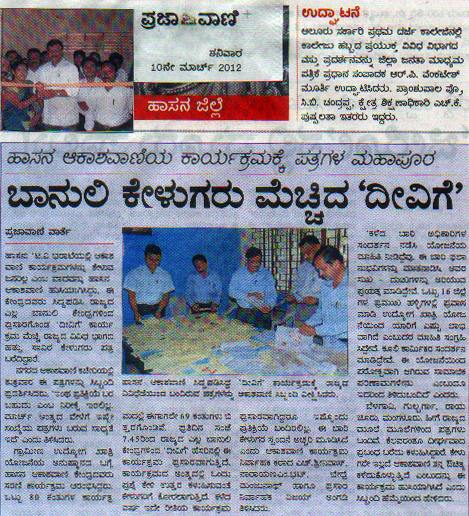 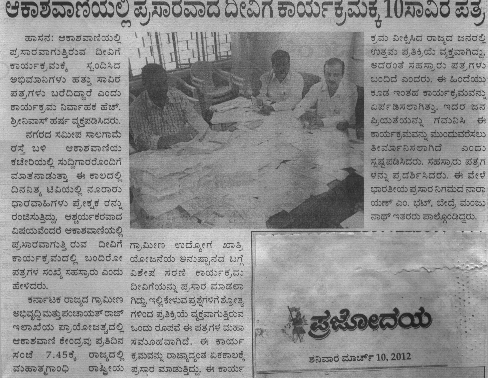 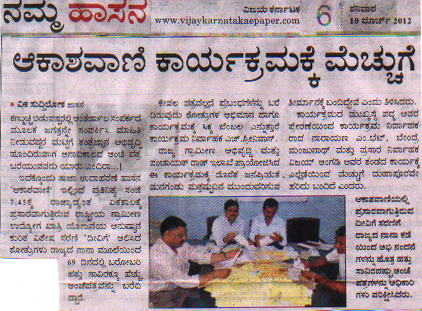 Posted by Bedre Manjunath at 8:02 AM

Here you can sell and buy both new and used products.
This website is perfect for selling just about anything at all.