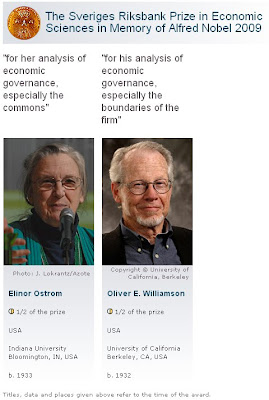 "for her analysis of economic governance, especially the commons"

"for his analysis of economic governance, especially the boundaries of the firm"


Economic governance: the organization of cooperation

Elinor Ostrom has demonstrated how common property can be successfully managed by user associations. Oliver Williamson has developed a theory where business firms serve as structures for conflict resolution. Over the last three decades these seminal contributions have advanced economic governance research from the fringe to the forefront of scientific attention.

Economic transactions take place not only in markets, but also within firms, associations, households, and agencies. Whereas economic theory has comprehensively illuminated the virtues and limitations of markets, it has traditionally paid less attention to other institutional arrangements. The research of Elinor Ostrom and Oliver Williamson demonstrates that economic analysis can shed light on most forms of social organization.

Elinor Ostrom has challenged the conventional wisdom that common property is poorly managed and should be either regulated by central authorities or privatized. Based on numerous studies of user-managed fish stocks, pastures, woods, lakes, and groundwater basins, Ostrom concludes that the outcomes are, more often than not, better than predicted by standard theories. She observes that resource users frequently develop sophisticated mechanisms for decision-making and rule enforcement to handle conflicts of interest, and she characterizes the rules that promote successful outcomes.

Oliver Williamson has argued that markets and hierarchical organizations, such as firms, represent alternative governance structures which differ in their approaches to resolving conflicts of interest. The drawback of markets is that they often entail haggling and disagreement. The drawback of firms is that authority, which mitigates contention, can be abused. Competitive markets work relatively well because buyers and sellers can turn to other trading partners in case of dissent. But when market competition is limited, firms are better suited for conflict resolution than markets. A key prediction of Williamson's theory, which has also been supported empirically, is therefore that the propensity of economic agents to conduct their transactions inside the boundaries of a firm increases along with the relationship-specific features of their assets.

Read more about this year's prize

Elinor Ostrom, US citizen. Born in 1933 in Los Angeles, CA, USA. Ph.D. in Political Science in 1965 from the University of California, Los Angeles, USA. Arthur F. Bentley Professor of Political Science and Professor at the School of Public and Environmental Affairs, both at Indiana University, Bloomington, USA. Founding Director of the Center for the Study of Institutional Diversity, Arizona State University, Tempe, USA.
www.cogs.indiana.edu/people/homepages/ostrom.html

Oliver E. Williamson, US citizen. Born in 1932 in Superior, WI, USA. Ph.D. in Economics in 1963 from Carnegie Mellon University, Pittsburgh, PA, USA. Edgar F. Kaiser Professor Emeritus of Business, Economics and Law and Professor of the Graduate School, both at the University of California, Berkeley, USA.
www2.haas.berkeley.edu/Faculty/williamson_oliver.aspx

The Prize amount: SEK 10 million, to be shared equally between the Laureates.

The Royal Swedish Academy of Sciences, founded in 1739, is an independent organization whose overall objective is to promote the sciences and strengthen their influence in society. The Academy takes special responsibility for the natural sciences and mathematics, but endeavours to promote the exchange of ideas between various disciplines.

Information for the Public

Information for the Public »

Links to other sites

On Elinor Ostrom from Indiana University

Links to other sites

On Oliver E. Williamson from University of California, Berkeley

Posted by Bedre Manjunath at 5:05 PM

Thank you for nice information, Visit Us:
Here