Sangeetha Vidushi T.R.Shubangi Gorur - A Tribute to the immortal soul by her daughter 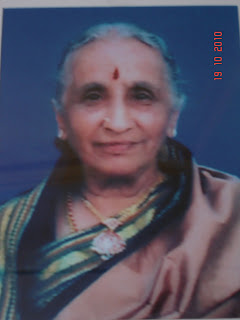 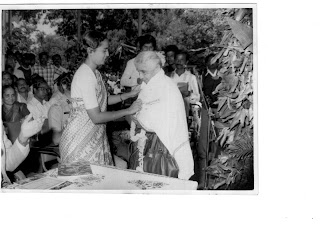 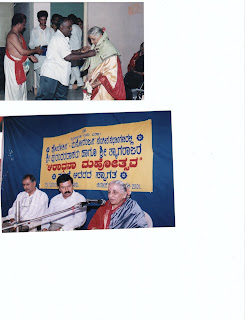 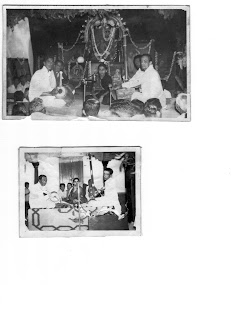 A TRI BUTE TO THE I MMORTAL SOUL

Chickmagalur district is well known for its ancient cults of I ndian heritage. M any artists and literati have taken birth on this soil.
Sangitha Vidushi T.R.ShubangiGorur is one such scholarly person. Born into a very religious family in 1930, she grew up in an environment congenial for musical training and her journey into the realm of carnatic music started at a very tender age. Nuptial vows at the age of 15 ensued with her husband Dr. T.R Gorur, a self-made man, a prudent clinician and a musician himself, who went on to become the Municipal President of Chickmagalur. His wholehearted , undeterred support and inspiration helped her intellectual aspirations and dreams come true. She personified enthusiasm with the divine energy pervading her all sheaths of existence. She was an artist of rare perception.

She was trained in Carnatic music under the tutelage of Vidwan Subba Rao,Chintalapalli KrishnaM urthy and H.Puttachar. She emerged as a 2nd rank holder with two gold medals in her kitty in the Vidwath exams conducted by the University of M ysore in 1958. Her regular, soulful renditions on All I ndia Radio since its inception, spanning nearly 20 years from 1950 to 1970, were extolled by the contemporary singers. All her admirers would be eagerly looking forward to the broadcast of her enlivening music to feast their ears. Her innumerable public performances, all over Karnataka and outside the state were being held in Gayana Sabhas and during Ramothsava and Ganeshothsava ceremonies.

She enjoyed the privilage of having stalwart artists like B. Keshava M urthy, Rathnagiri Subbashastry, Sheshagiri, Thathachar,S.M ahadevappa and S.Puttachar,H.P.Ramachar,VyyapuriDevar and M .S.Ramaiah,
Bhadrachar,V.V.Ranganath and M ysore KrishnaM urthy as her accompanists. Her enthralling and regaling music concerts left the audience spellbound. This virtuoso was endowed with a captivating divine voice. Her flawless singing was an amalgamation of extensive elaboration of Ragas and Krithis set to precise Talas.

Despite the fact that she had shunned publicity, awards were bestowed upon her in cosideration of her eminence as a singer. She was conferred the title of “Sangeetha Vidhushi"by the M usic Examination
Board of Department of Public I nstruction. She was honoured by Kannada Sahithya Parishath at Chickmagalur in 1984.

Scores of students whom she trained have won laurels in turn suceeding in establishing her authenticity. With her rich expertise she embarked upon a venture to encapsulate the insightful wisdom she had acquired over the years. She took to writing a book on pallavi.

Her exemplary work on pallavi has gained critical acclaim in the carnatic musical fraternity. This pioneer work titled ‘Pallavi Krithigalu’ authored by her is one of its kind in the field of music. This work has the prerogative of its preface penned by the veteran singer Pallavi Chandrappa and was esteemed by music exponent Smt.M .S.Subbalaksmi during her visit to Chickmagalur. Subtle nuances and intricacies related to Talas comprehending division of 7 Talas into 175 sub-divisions are set to different Pallavis composed by ancient vaggeyakaras like Sri Purandaradasa, Sri Tyagaraja, Sri mutthuswamy Deekshithar, Sri Shyaamaashastry, Sri Swathithirunal and M ysore Vasudevaacharya in 72 M elakartha ragas . This extensive work comes in handy for not only the proficient singers but also for those in pursuit of advanced courses in carnatic music. ‘Pallavi Krithigalu’ was printed and published by the Diamond Jubilee Publications of M ysore University.

This incredible book was released by ex- Deputy Chief Minister Sri Siddaramiah in the presence of ex- Prime M inister Sri H.D.Deve Gowda. Her prowess as an accomplished singer was the testimony. Subsequently she was honoured by various reputed organizations in recognition of her invaluable contribution to the field of Carnatic music. I n addition to her aforementioned noteworthy achievements she excelled as a Gamaka exponent. A multifaceted woman, who showed her mettle in various forms of fine art.

On the personal front, she was an epitome of virtues, who conducted herself with elegant poise and had profound knowledge on ‘Vishistadvaitha philosophy’. This pious lady was an ardent devotee of Lord Vishnu whose day would invariably begin with a prolonged meditation, visualizing and visiting mentally all ancient temples,performing ‘maanasika pooja’. She has brought out a booklet on the methodology of this form of contemplation for her followers to emulate.

She retired at the peak of her career following turbulence on the health front and went into hibernation. She had renounced all the worldly pleasures during her fag end of her life. Her commendable spiritual attributes need to be imbibed.
She was destined to depart for her heavenly abode on 12th-Oct-2009. In her death,all music lovers have lost a priceless possession.


Sangeetha Vidushi T.R.Shubangi Gorur - A Tribute to the immortal soul by her daughter
Posted by Bedre Manjunath at 11:24 AM

Email ThisBlogThis!Share to TwitterShare to FacebookShare to Pinterest
Labels: Sangeetha Vidushi T.R.Shubangi Gorur - A Tribute to the immortal soul by her daughter

This article is an eye opener in itself. people should henceforth recognize such unsung heroes and bring them to limelight.
-Madhura

Lucky are those who are blessed with divine talents. We start recognizing the value of such unsung personalities only when they depart from us to heavenly abode.